The map will be continuously updated with new information as the Campaign adds items to each province. If you would like to suggest items to add to the map, please feel free to contact us.

Why They Left; Stories of Iranian Activists in Exile

Why They Left; Stories of Iranian Activists in Exile

The Iranian activist Kaveh Kermanshahi was free on bail in 2010 when an Iranian court sentenced him to four years in prison for his work on Kurdish and women’s rights. Kermanshahi, who was 26 at the time, decided he couldn’t return to prison, where he had been tortured, interrogated, and held in solitary confinement for four months after he was arrested earlier that year. He decided to leave Iran for Iraqi Kurdistan.

“I did not wish to leave because I thought I would be vindicated in court and believed in my innocence,” Kermanshahi said. “But this didn’t happen.”

A soft-spoken Iranian-Kurd with a bachelor’s degree in law, Kermanshahi is one of hundreds of activists who felt compelled to flee Iran in the wake of the violent suppression of the 2009 post-election anti-government protests.  Iran’s government has increasingly targeted people who speak out against it, and waves of activists have felt their only reasonable alternative was to seek asylum abroad. Kermanshahi eventually resettled in Germany.
Kermanshahi had already paid a high price for his activities. He was beaten on two separate occasions by his interrogator in prison. 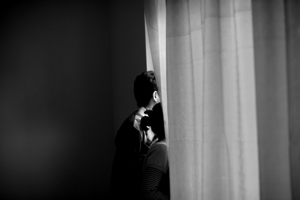 “Once unfortunately I was severely beaten by the prosecutor himself who had come to the detention facility to inform me of the charges against me,” he said.

He didn’t think he could withstand four more years in prison – the psychological distress weighed heavily on him, and the surgeries he had for a cleft lip left him more vulnerable to the beatings that he believed would come.

He also worried about how future imprisonment would affect his family. Kermanshahi, an only child, had been “disappeared” when he was arrested. No one knew where he was. His mother and other family members repeatedly went to the prosecutor’s office and prison trying to glean information about where he was being held. In response, the authorities arrested his mother, his 75-year-old aunt, and two cousins, interrogating and threatening them for hours. They were freed only after they promised to stop trying to find out where he was.

Eventually authorities did tell his family where he was, and his mother handed over the deed to their land to post bail – a common occurrence in Iran.

The court found Kermanshahi guilty of spreading propaganda against the state as a result of his work with the Human Rights Organization of Kurdistan, which pressed the government to end discrimination against Kurds, and through his blog. He was also found guilty of contacting families of political prisoners.

“My friends and colleagues were either arrested or harassed by telephone and ordered to stop their activities,” Kermanshahi explained. “They were ordered “to stop writing about rights violations that were taking place.”

Kermanshahi became an activist in 2005, joining the Kurdish rights group Zhiar. When the government shut down the group, he joined Iran’s “one million signatures” campaign, an influential grass-roots women’s rights campaign that called for women’s equal rights in marriage, divorce, custody, and inheritance.

In 2005, Kermanshahi also started a blog, which the Iranian government blocked his blog several times. He also wrote reports, news items and articles in collaboration with Radio Zamaneh, Roozonline, Change for Equality, and other Kurdish and Farsi websites. He has appeared as a source in the BBC, Deutsche Welle, and other media outlets.

The price of activism increased substantially for Kermanshahi and many others after the ruthless crackdown that followed the 2009 presidential election. Kermanshahi helped organize some of the protests, attended others, and reported on them in the news. Yet Kermanshahi and others continued their activities. For Kermanshahi, one of the most important reasons to continue with his activism was the need to comfort the families of other imprisoned activists. Sometimes all he could do was grieve with families of executed activists. He let these families know that they had support, and that they were not alone.

Because of his commitment to free expression, Human Rights Watch awarded Kermanshahi, along with other political writers, a 2011 Hellman-Hammett grant for writers who continue their work in the face of persecution.

Much of Kermanshahi’s energy these days is spent adjusting to his new home in Berlin and learning German and English. He does what he can to stay involved with events in Iran and with Germany’s large Iranian community.

“Unfortunately the situation in Iran is not good at the moment,” he said, noting the number of people who are either arrested, in exile, or silent. “What brings us hope is the history of the past several decades in Iran. We have seen lots of repression of this kind in the past 30 years, but every time this happened it didn’t result in the end of [political] activities.”

Tags: Iranian-Kurd, Kaveh Kermanshahi, The Iranian activist, with a bachelor’s degree in law