list of 41 lawyers persecuted and jailed for trying to uphold the rule of law in Iran,

The list has been prepared by Iran’s Nobel Peace laureate Ms. Shirin Ebadi, who updates it routinely to keep track of which lawyers are in jail, which are out on bail, and which have been forced to flee the country. 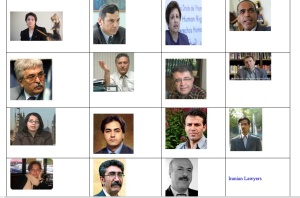