Attacks in Evin Prison in Iran

On 25 April 2014, nine days after the attacks on prisoners in Evin Prison in Iran on 17 April 2014, the UN High Commissioner for Human Rights has yet to make a public statement on the human rights violations that took place. FIDH and its member organization LDDHI have written an open letter to the High Commissioner calling on her to stand in support of the rights of prisoners in Iran and their families. The letter includes a detailed account of the events of 17 April and the days that followed, as well as lists of injured prisoners and their injuries, and prisoners sent to solitary confinement.

FIDH and its member organization, the League for the Defence of Human Rights in Iran (LDDHI), call on you to respond publicly and firmly to the violent attacks that took place on 17 April 2014 in Evin Prison Iran.

At 9:30 a.m. on 17 April 2014, plain-­‐clothed agents and around 60 members of the Prison Special Guard, armed with batons and anti-­‐riot gear, attacked prisoners in Ward 350 of Evin Prison in Iran. Dozens of prisoners were injured, and more than 30 prisoners were sent to solitary confinement. Prisoners were subjected to inhuman treatment and those in solitary confinement were denied proper medical care despite their injuries. At least 11 prisoners still remained in solitary confinement as of Friday 25 April, and are reportedly on hunger strike. Dozens of prisoners who are currently in Ward 350 of Evin prison have also gone on hunger strike until the Iranian government responds to their calls for justice for the violations that took place on 17 April.

The Iranian authorities have thus far done very little in response to the attacks and the subsequent calls from prisoners and their families. High-­‐level officials including the Head of the Judiciary and the Minister of Justice have denied that any serious injuries or wrongdoings took place on 17 April.

Our organizations have compiled an account of the events that took place in Ward 350 of Evin Prison on 17 April and the days that followed, as well as the names of prisoners who were injured and an inventory of their injuries, and the names of prisoners who are known to have been sent to solitary confinement, including those who have yet to return to Ward 350 as of today. Please find this information annexed here; we are certain that these facts provide sufficient cause for concern and thus warrant a serious response from your office.

We expect the Office of the UN High Commissioner for Human Rights to react to the serious violations that took place on 17 April, the torture and ill treatment of the prisoners in the days that followed, the remaining solitary confinement of 11 prisoners, and denial of the Iranian authorities, who refuse to properly investigate the violence that took place and who continue to deny the rights of the prisoners in Ward 350 of Evin Prison.We therefore urge you to: 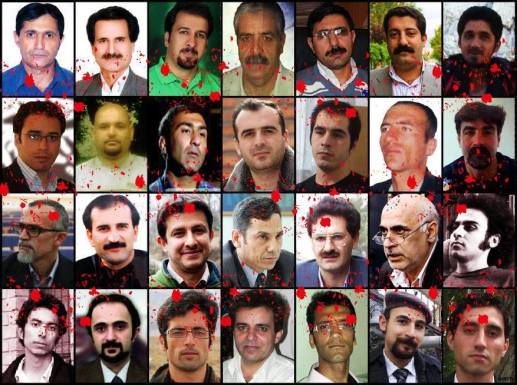 Read the detailed account of the events of 17 April and the days that followed, as well as lists of injured prisoners and their injuries, and prisoners sent to solitary confinement.