We Petition The Obama Administration to: Support Kurdish Independence

WE PETITION THE OBAMA ADMINISTRATION TO: 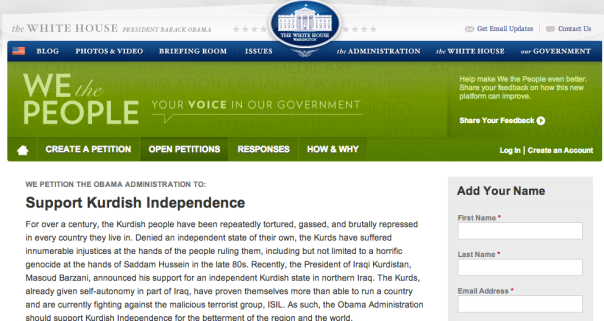 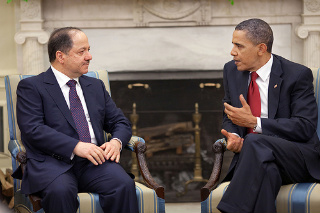 For over a century, the Kurdish people have been repeatedly tortured, gassed, and brutally repressed in every country they live in.

Denied an independent state of their own, the Kurds have suffered innumerable injustices at the hands of the people ruling them, including but not limited to a horrific genocide at the hands of Saddam Hussein in the late 80s. Recently, the President of Iraqi Kurdistan, Masoud Barzani, announced his support for an independent Kurdish state in northern Iraq.

The Kurds, already given self-autonomy in part of Iraq, have proven themselves more than able to run a country and are currently fighting against the malicious terrorist group, ISIL. As such, the Obama Administration should support Kurdish Independence for the betterment of the region and the world.

Jonathan Schwoerer hopes to get 100,000 signatures on the White House petition website and oblige the US Government to make an official comment.

“I’ve always been interested in Middle East politics and this Kurdish issue just resonates with me,” said Schwoerer, 16, from Poughkeepsie in upstate New York. “I have a great respect for a people who have been betrayed and denied a state and are now fighting for their inherent right to self-determination.”

Schwoerer says he is an “ordinary high school student”. His Facebook page is decorated with a photo of the Kurdish flag and another of himself holding Twinkie cake snacks. The petition has already garnered more than 38,000 signatures and has until August 22 to reach its target.

It describes how Kurds suffered under Iraq’s former president, Saddam Hussein, and are currently threatened by Islamic State militants. Turmoil in Iraq and greater autonomy for its northern Kurdish provinces have raised the spectre of a free Kurdish state breaking away from the south. But the US and the UN warn against Iraq fragmenting and say Kurds, Sunnis, Shias and other groups should work together in a unified nation.

“Obama is selfish in this respect,” Schwoerer told Rudaw. “He doesn’t want to be the president under whose watch Iraq disintegrates.”

Kani Xulam, director at American Kurdish Information Network, said he saw a link to the petition being shared online and was among the first to sign up.

“When you have 100,000 people saying they care about this issue then the White House has to take notice,” Xulam said.

If we can get Americans, British and the French to say they recognize the right of Kurdish people to their place in the sun, then this will be progress.

” The petition can be found here: