The US Confirms Report Citing Iran Officials as Saying 1,500 Killed in Protests

WASHINGTON – The United States has confirmed a news report citing unnamed Iranian officials as saying about 1,500 people were killed in a crackdown by security forces on anti-government protests last month.

In a report published Monday, London-based Reuters said it obtained the death toll from three Iranian interior ministry officials who said the fatalities included “at least 17 teenagers and about 400 women as well as some members of the security forces and police.”

Special Report: Iran’s Leader Ordered Crackdown on Unrest – ‘Do Whatever it Takes to End it’
Order, confirmed by three sources close to the supreme leader’s inner circle and a fourth official, set in motion the bloodiest crackdown on protesters since the Islamic Revolution in 1979

In a Monday tweet, the State Department quoted U.S. Special Representative for Iran Brian Hook as saying the Reuters report “underscores the urgency for the international community to punish the perpetrators and isolate the regime for the murder of 1,500 Iranian citizens.”

Special Representative for Iran Brian Hook: “The @Reuters report on the massacre ordered by @khamenei_ir underscores the urgency for the international community to punish the perpetrators and isolate the regime for the murder of 1,500 Iranian citizens.” https://twitter.com/Reuters/status/1209042720095735808 …

About 1,500 people died during the recent unrest in Iran, government officials tell @Reuters, in the country’s deadliest unrest since the 1979 Islamic Revolution https://reut.rs/35TefNK 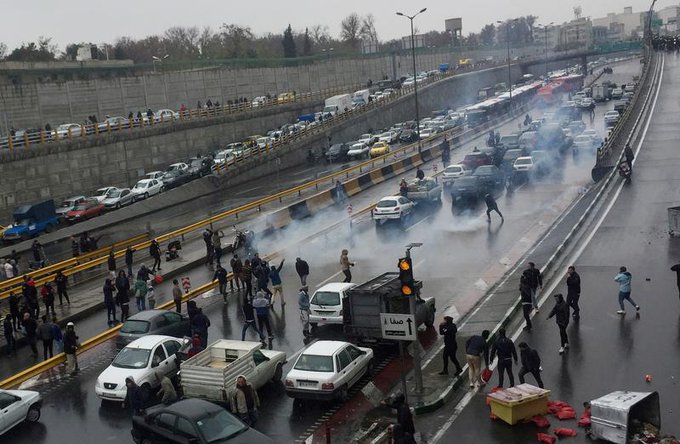 Reuters’ death toll was much higher than the latest fatalities reported by British rights group Amnesty International, which said in Dec. 16 statement that it documented the killings of at least 304 demonstrators by Iranian security forces in days of unrest that erupted on Nov. 15.

Hook’s reference to the “murder of 1,500 Iranian citizens” also marked a substantial increase in the Trump administration’s assessment of the number of people killed in Iran’s crackdown.

In a Dec. 5 briefing to reporters, Hook said it appeared that the Iranian government  “could have murdered over a thousand Iranian citizens since the protests began.”

US Official: Iran Protest Deaths May Have Topped 1,000
Deadly protests erupted last month after government boosted fuel prices by as much as 300%

“These claims are based on premeditated psychological warfare and lack credibility,” Alireza Zarifian Yeganeh said, echoing previous Iranian dismissals of Western reports about fatalities in the protests.

But Iran has declined to try to prove the Western reports wrong by releasing its own figures for those killed, wounded and arrested in the crackdown on the protests.

Iranian authorities sparked the demonstrations in dozens of cities nationwide by raising the subsidized price of gasoline by 50%, further straining the finances of Iranians facing high unemployment and inflation in a shrinking economy under heavy U.S. sanctions.

In a Dec. 16 interview with VOA Persian, Amnesty’s Middle East researcher Philip Luther said he expected the group to raise its figure of 304 protesters killed due to its ongoing examination of “credible” reports showing Iranian security forces used live ammunition while suppressing the demonstrations.

Amnesty did not respond immediately to a VOA Persian request for comment on the Reuters report citing the figure of 1,500 people killed in the unrest.

Amnesty’s reported death tolls from Iran’s unrest have been widely quoted by Western news outlets, which, besides Reuters, have been unable to verify the full scale of the killings due to Iranian restrictions on their access to the country.

The rights group has said it compiles its death tolls from reports whose credibility it ascertains by interviewing and cross-checking details provided by a “range of sources inside and outside Iran, including victims’ relatives, journalists and human rights activists involved in gathering the information.”

The Reuters report also cited three sources close to Iran’s Supreme Leader Ayatollah Ali Khamenei and a fourth official as saying Khamenei met his top officials on Nov. 17 and ordered them to “do whatever it takes” to end the protests, which had spread rapidly since beginning two days earlier.

Reuters said its sources also quoted Khamenei as telling the assembled officials that he would “hold them responsible for the consequences of the protests” if they didn’t stop them immediately.

“That is part of the Supreme Leader’s modus operandi,” said Jason Brodsky, policy director for U.S. advocacy group United Against Nuclear Iran, in a VOA Persian interview. “He tends to defer to lower-level officials in order to avoid personal culpability to protect his office and his political brand.”

Brodsky cited as another example Khamenei’s criticism of Iranian Foreign Minister  Mohammad Javad Zarif and President Hassan Rouhani for perceived failings of the 2015 nuclear deal they negotiated with world powers on Khamenei’s behalf.

Regarding Hook’s call for the international community to “punish and isolate” the Iranian government for what he called the “massacre” ordered by Khamenei, Brodsky said the U.N. Security Council should consider referring the crackdown to the International Criminal Court. But he said any resolution calling for a referral could be vetoed by permanent council members Russia and China, longtime military and economic allies of Tehran.

Speaking separately to VOA Persian, Middle East analyst Michael Pregent of the Hudson Institute said the Trump administration also could do more to toughen its campaign of economic and diplomatic pressure against Iran. “Go after Khamenei’s personal assets,” he said.

The Foundation for Defense of Democracies has estimated that Khamenei controls at least $200 billion of assets through three tax-exempt foundations, not directly sanctioned by the United States.

“But I’m not certain that the international community has the appetite to go after the supreme leader,” Pregent said. He cited a lack of efforts by other nations to penalize Iran for what the U.S. has said are Iranian violations of human rights and existing U.N. Security Council resolutions.
This article originated in VOA’s Persian Service.

Posted on December 23, 2019, in English. Bookmark the permalink. Leave a comment.