Reports from Tehran say there are tight security measures near several universities and academic centers particularly in downtown Tehran where demonstrations have been going on since Saturday evening.

Meanwhile, large groups of young people gathered at the Azadi Square in Tehran Sunday afternoon and early evening to hold a vigil while chanting slogans against the regime and the IRGC, protesting the downing of a Ukrainian airliner that left 176 passengers and crew, including many Iranian students and academics dead.

Marchers chanted, “A government of Guards…We reject, we reject”, in a reference to IRGC with tremendous political and economic power in Iran. 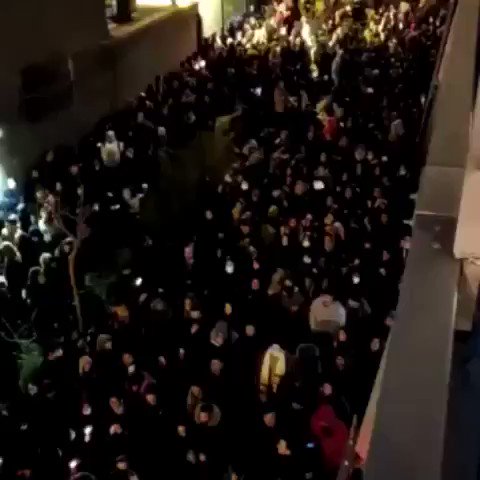 It appears that the protest demonstrations that shook Iran in mid-November are making a comeback with a renewed rigor. However, the riot police appear to be more reserved after reportedly killing up to 1,500 demonstrators in the previous round of the protests. No deaths were reported so far on Saturday and Sunday.

Eyewitnesses have already reported security forces intermittently shooting in the air and using tear gas in Tehran including at Azadi Square Sunday evening. Foreign-based satellite TVs have been reporting about the police beating the demonstrators as darkness fell over the Iranian capital.

Videos on social media later in the evening showed scenes of plainclothes agents attacking people and in one case an agents is said to have shot a woman in the leg,

A Tehran University professor observed that security measures were even tight around Imam Sadeq University where selected pro-regime students study to become the cadres of the Iranian Foreign Ministry and Intelligence Ministry.

Professor Sadeq Zibakalam wrote: “It is understandable though bitter to see special unit troops near the Polytechnic, Sharif, Tehran, Beheshti and Allame Universities. But seeing special units in front of Imam Sadeq University is still bitter but not understandable as they are carefully selected. Do they need to be watched too?”

Anti-riot troops and armored vehicles were also reported to be present near Beheshti University in northern Tehran on the slopes of the Alborz mountains.

Students at Beheshti University refused to stampede on U.S. and Israeli flags while booing a handful of students belonging to Basij militia who stepped on the flags.

Another reflection of Iranian students not reflecting the animosity towards the USA & Israel expressed by their government. https://twitter.com/gesfandiari/status/1216321586376183811 … 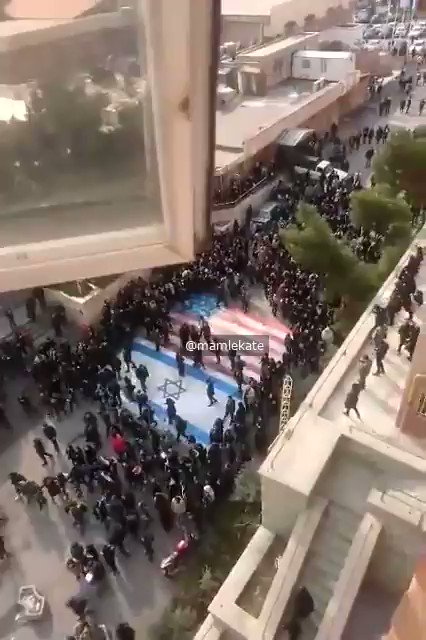 The protests in Tehran started Saturday evening following a vigil held at Amir Kabir University for the victims of the Ukrainian passenger jet shot down on Wednesday that claimed 176 Iranian lives, mainly elite students and academics on their way to Canada via Ukraine.

The vigils soon turned into anti-government demonstrations demanding regime change. Meanwhile the protests spread to several universities in other Iranian cities including Isfahan, Babolsar and Sari.

Calls were made Saturday night for further vigils at Azadi [Freedom] squares in Tehran and other cities. However, Iranian filmmaker Ms. Rakhsan Bani Etemad who made the call in Tehran said later that she was under immense pressure by security officers to call off the vigil.

Nevertheless, large groups of young people gathered at the Azadi Square in Tehran Sunday afternoon for the vigil while chanting slogans against the regime and the Islamic Revolution Guards Corps (IRGC) which has accepted responsibility for the attack on the civilian passenger jet on Wednesday.

Also Saturday night, a commentator on state TV said that Bani Etemad was inviting trouble for herself and her daughter, a renowned actress.

Meanwhile many Iranian film, theatre, music and graphic artists have pulled out their works from the Fajr Festivals that mark the anniversary of the Islamic Revolution in February.

Posted on January 12, 2020, in English. Bookmark the permalink. Leave a comment.